Sunday morning down at The Table of Dreams. There was a slight delay to the game as we wiped muddy footprints from the playing service. It’s a public table, and each to their own. But you wouldn’t like it if I rocked up to play ping pong on your door welcome mat. 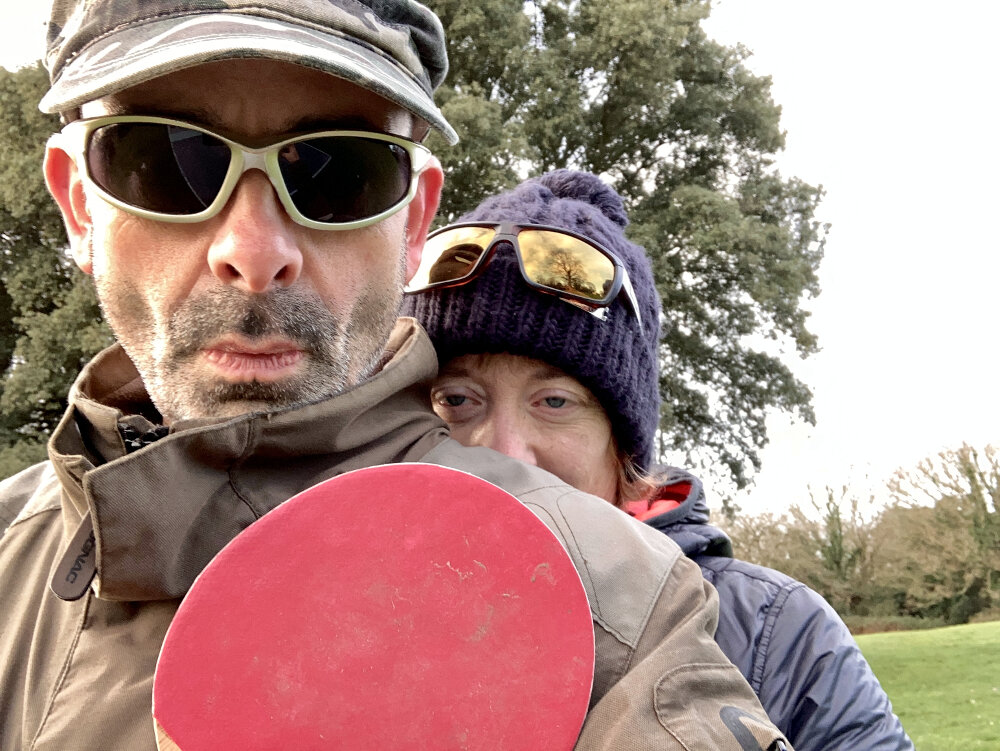 It was a wind assisted game. Both A and I are piss takers supreme when it comes to serving just as the Wind Tree next to the Table of Dreams starts to rustle up. Keep your eyes on the ball at all times, luv. Oh. That will be my point then. I walked away with a 5-2 win.

We carried on walking. And walking and walking. It was a race against the forecast rain to fit in a Sunday morning leg stretcher.

To Cockaynes Wood! …was the rallying call. Whatever. The local sorts around here RAVE about it. I find it a little dull and muddy tbh.

Puddle dodging was our first challenge as we set off up the back of the farm yard track. Hang on. They’re no puddles; they’re bloody lakes. One of my wellies may – or may not – have sprung a slight leak. I chose to ignore this.

This is the first time we have dragged our arses along this stretch for a while. We missed off the turning that would back track us along the gravel pits. We ended up in bloody Alresford. 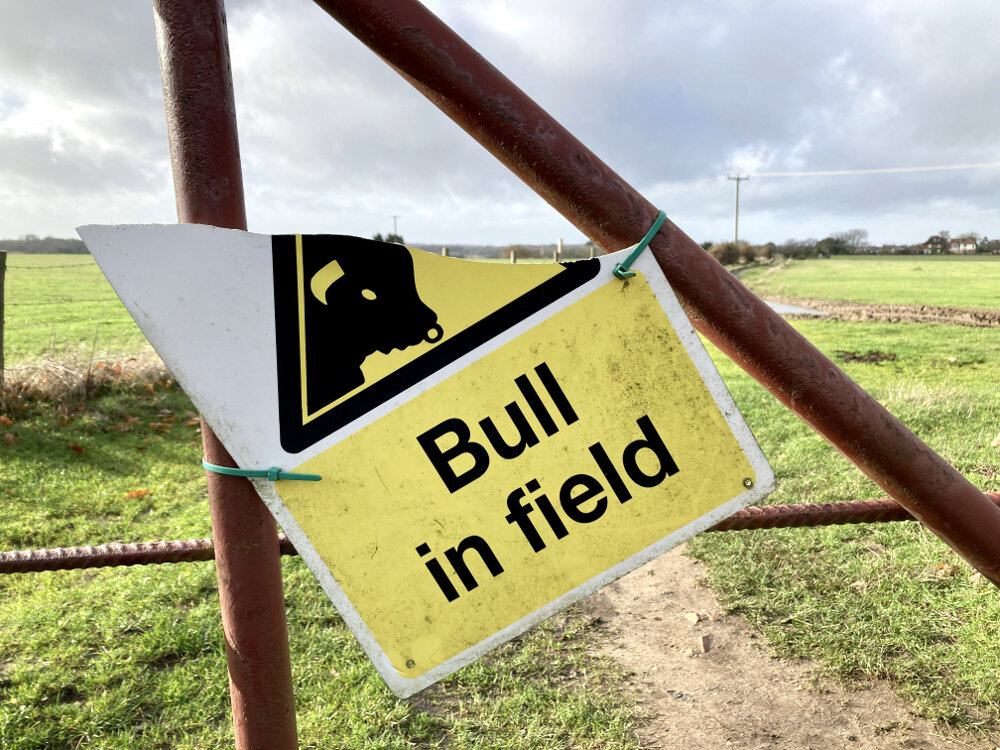 A decision had to be made: road or river? Road would be quicker, but also shitter. When presented with a choice, ALWAYS vote no cars, Comrades.

We shared an AirPod piece each and listened to a little of Robert Elms. His Listed Londoner was someone from The Globe. Apologies, but I didn’t catch the name as we navigated the fields of mud. It was quite a revelation to hear that The Globe “almost didn’t make it” at the height of Covid shit.

I almost didn’t make it either with the five mugs of tea before the morning wiff waff. I was caught short along a deserted Alresford lane. I paused to syphon the python with no one else around. Of. There was another couple walking towards us. 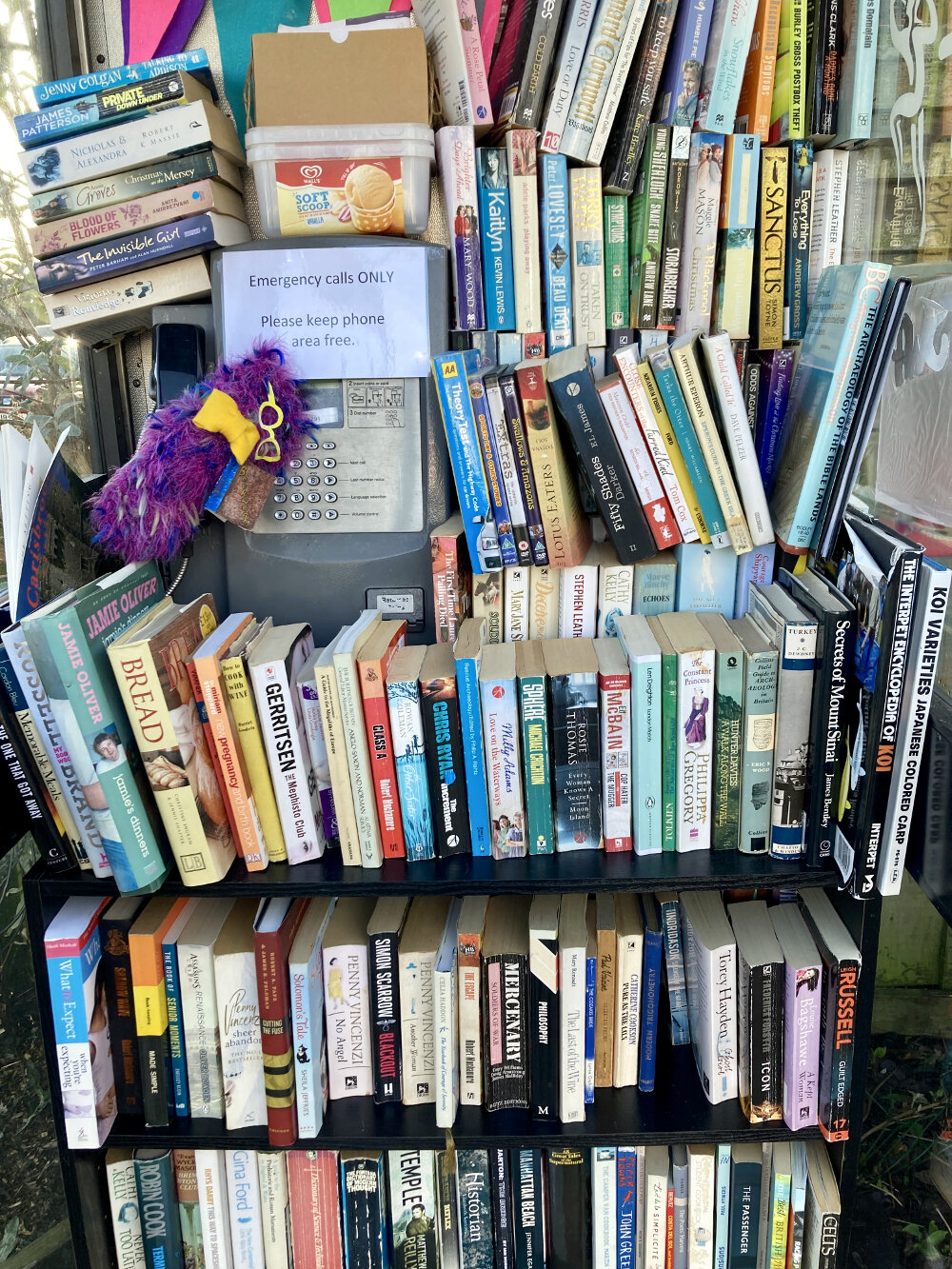 We paused at the Alresford phone booth now converted to a public library. You can always tell something about a community by the books offered up for free. Never judge a book, never judge a community , etc. We left empty handed. 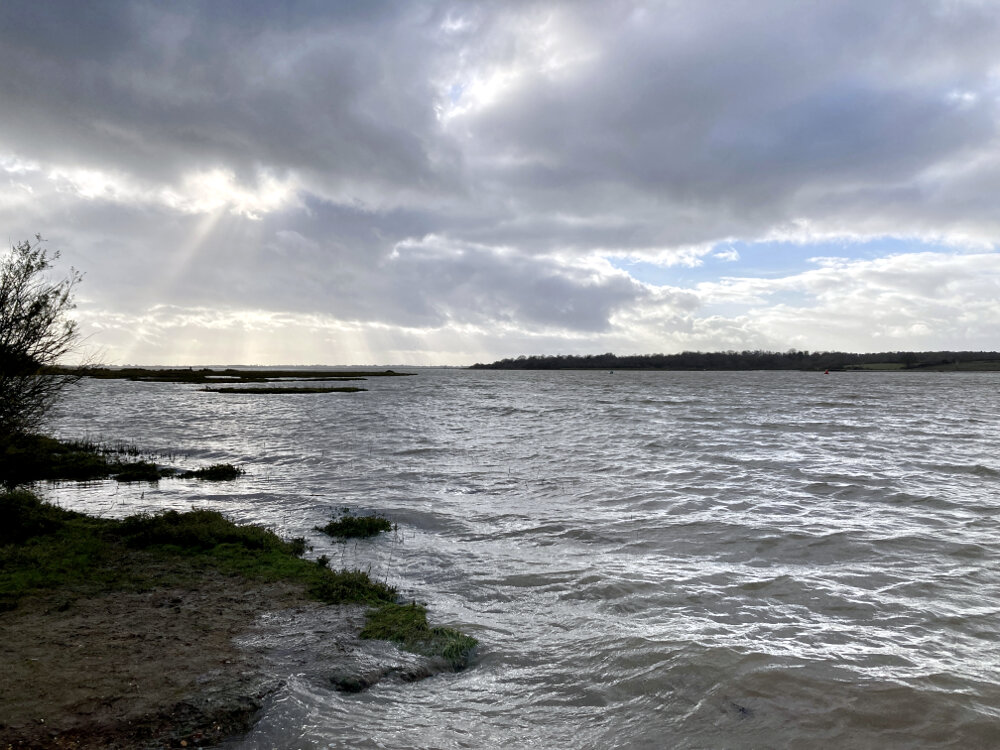 Soon we were back along the estuary banks. There was a fast incoming tide and choppy waters ahead. GOOD EFFORT from the Rowhedge rowing club who were making steady progress in the gig. Likewise for the cold water swimmers we saw leaving the dirty, dirty river at the public pontoon.

We had a quick turnaround back at base, and then out went the shout once again of: To the University! It was Day 2 of the WBBL Trophy weekender at the Essex Sports Arena. We missed the first 11am tip off, but arrived in time to see the start of Manchester Vs City of Ldn Academy.

This could have been a mismatch. Manchester play in the elite top tier. COLA are a development team of sixth formers. They has fantastic support from the stands. It wasn’t enough to get them over the line.

The in-game entertainment was of the usual high standard. There was a Cameo Candy mass public dancing session. Our backsides remained firmly positioned on the plastic seats. We were shamed into some public affection when the Kiss Cam beamed our mugs up on the big screen again. 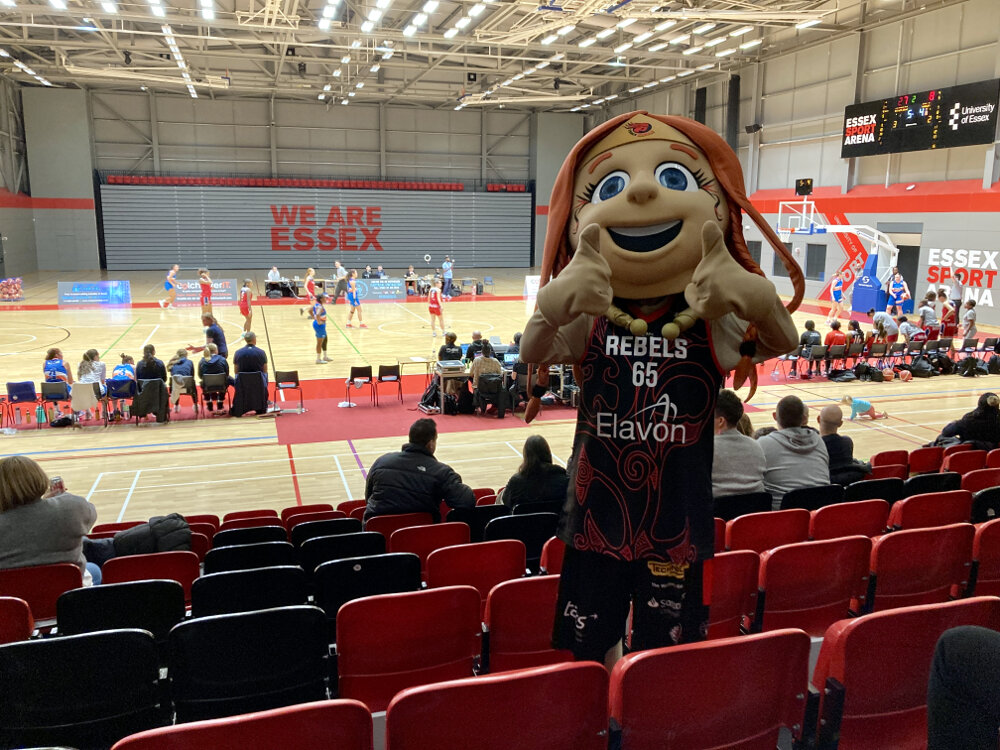 Newcastle Vs Nottingham was up next. This was a more balanced ball game. I had to leave halfway through the final quarter for work. Newcastle edged it at the buzzer. 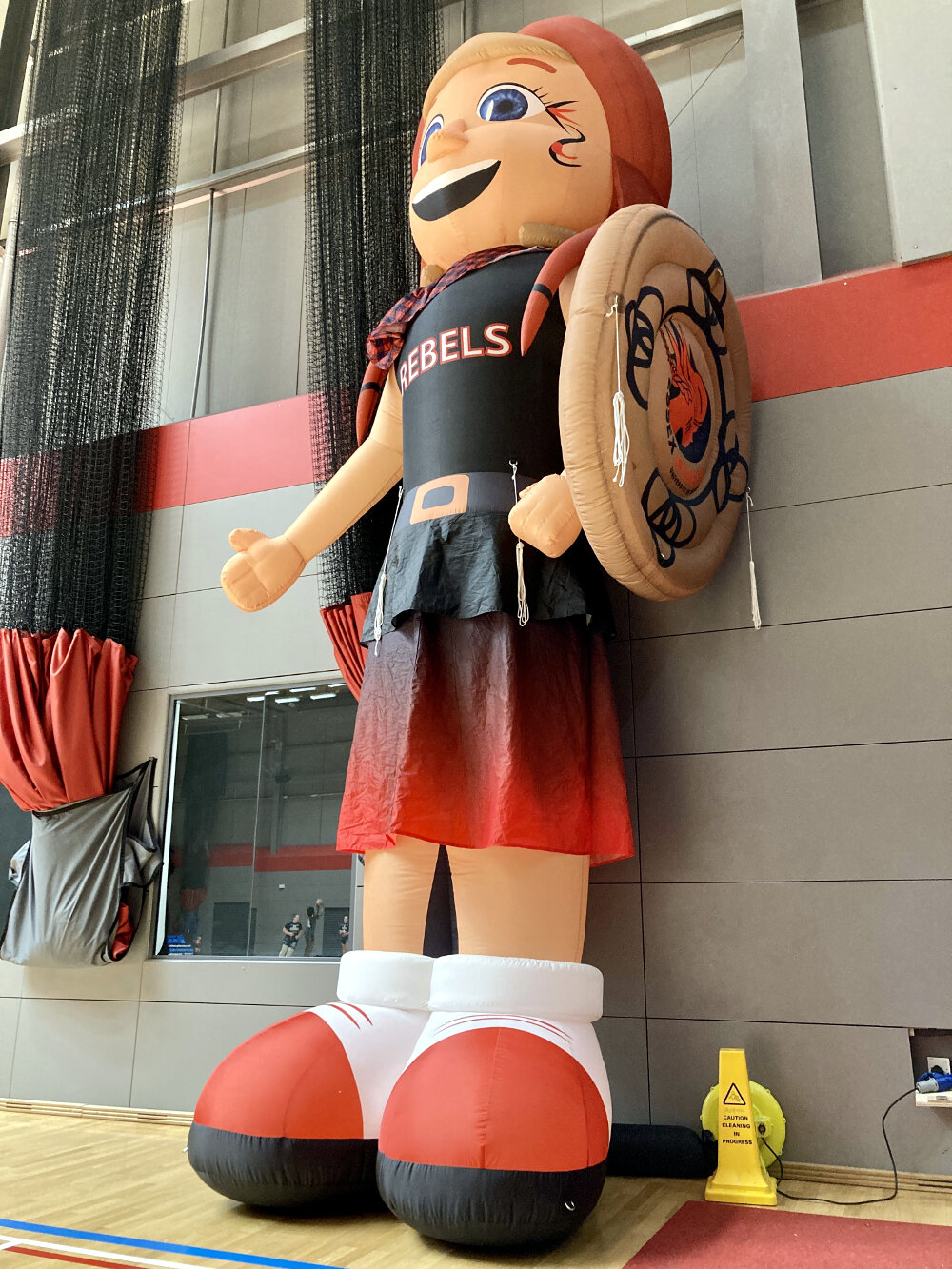 I got lucky with the Sunday night eBay snipes: a Crass T-shirt for under a tenner, a pair of Sundeck swimming shorts for an incredible 99p, and Roxy’s Manifesto CD also for 99p. I’m not sure what was going off with those prices.

I played the KDL Smoking in Heaven CD to keep me company whilst working. It’s an ACE album. I’d forgotten how ska based they can be when they fuse it with the rockabilly. I looked a little deeper into the sleeve notes. Blimey. Rico Rodriguez plays trombone on one of the tracks.

I’ve got a chuffing STUPID early start heading back to S Ldn in the morning.

The IMAX Roundabout at the end of Waterloo Bridge