I was running out of sporting options for first thing on Saturday morning. A fresh tattoo (healing nicely, ta) means swimming is a no no. Likewise for ParkRun. The bloody Estuary Wilds winter frost wasn’t exactly time trial cycling conditions.

And so a weekend walk instead. 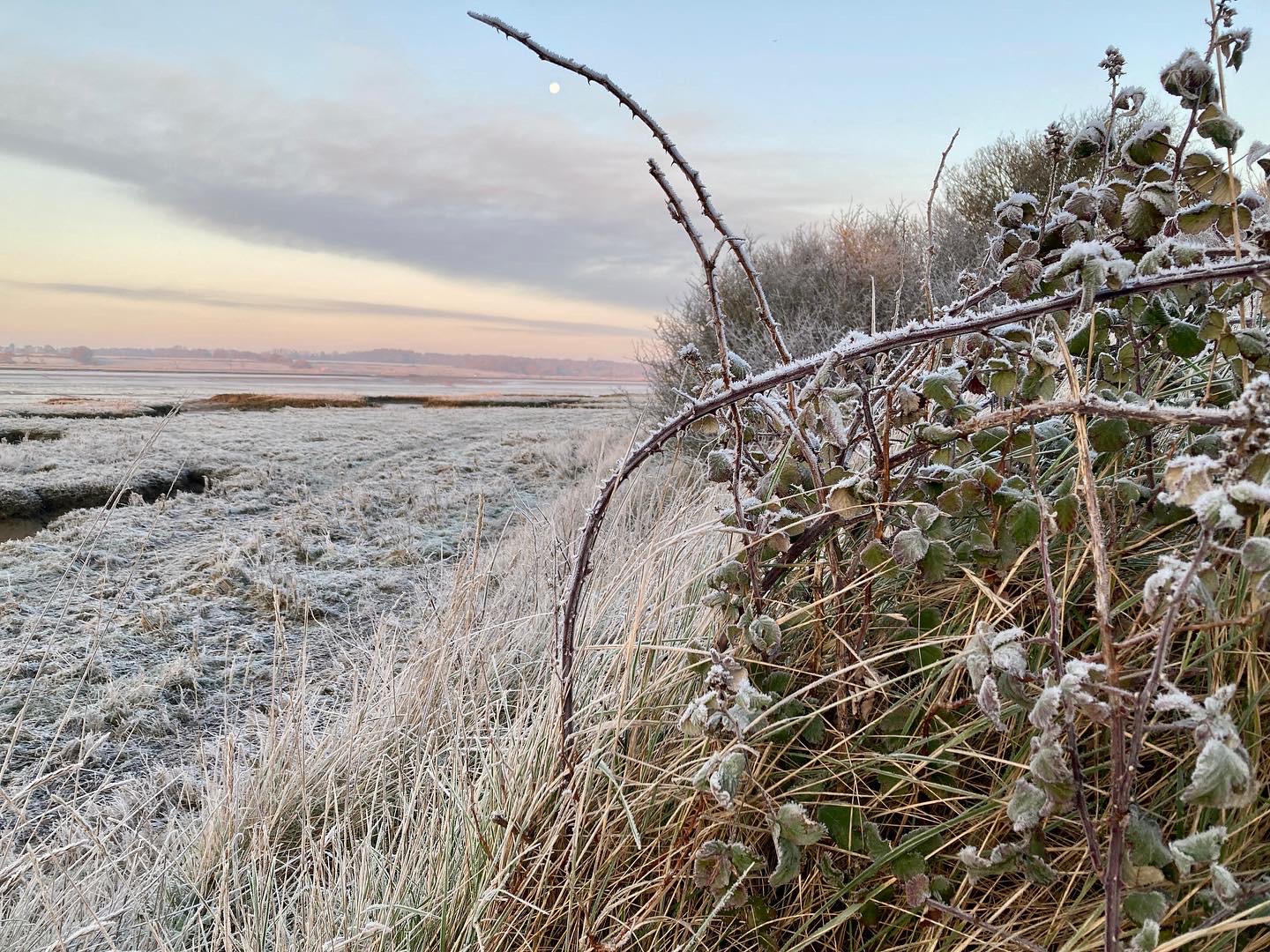 I strolled out as early as I could. Sunrise was down at 7:53am. That was a lie. I had sufficient light at 7:15am. The plans was for a brisk leg warmer out along the estuary, and then back through Alresdford. I needed a fast pace to keep my head from freezing.

This plan failed within the first ten minutes. I was walking with the V3 camera and the BONKERS wide angle lens. The overnight frost had led to some spectacular potential shots. I was stopping every 30 seconds or so.

I caught up with a couple of Never Strays Far podcasts. Literally. URGH. I love NSF, but every other sentence it littered with literally. It kinda gets on my tits. As ever, I have the problem, not NSF.

My new walking boots made good progress crunching along the old Crab and Winkle railway line. The ground below was solid. I had to abort my snapping as the macro lens frosted over.

I reached Fat Bloke’s bench at the mouth of the estuary. I paused, and was rewarded with a personal weekend fly past from the local Canadian Geese. It was quite a moment. Of course I should have accepted the scene for what it was and taken it all in. But no Insta post, no scene, right?

I pressed on with the walk along the back lane leading towards Alresdford. There was an energetic hill runner going through the paces with a f-off rucksack on his back. Respect, fella. 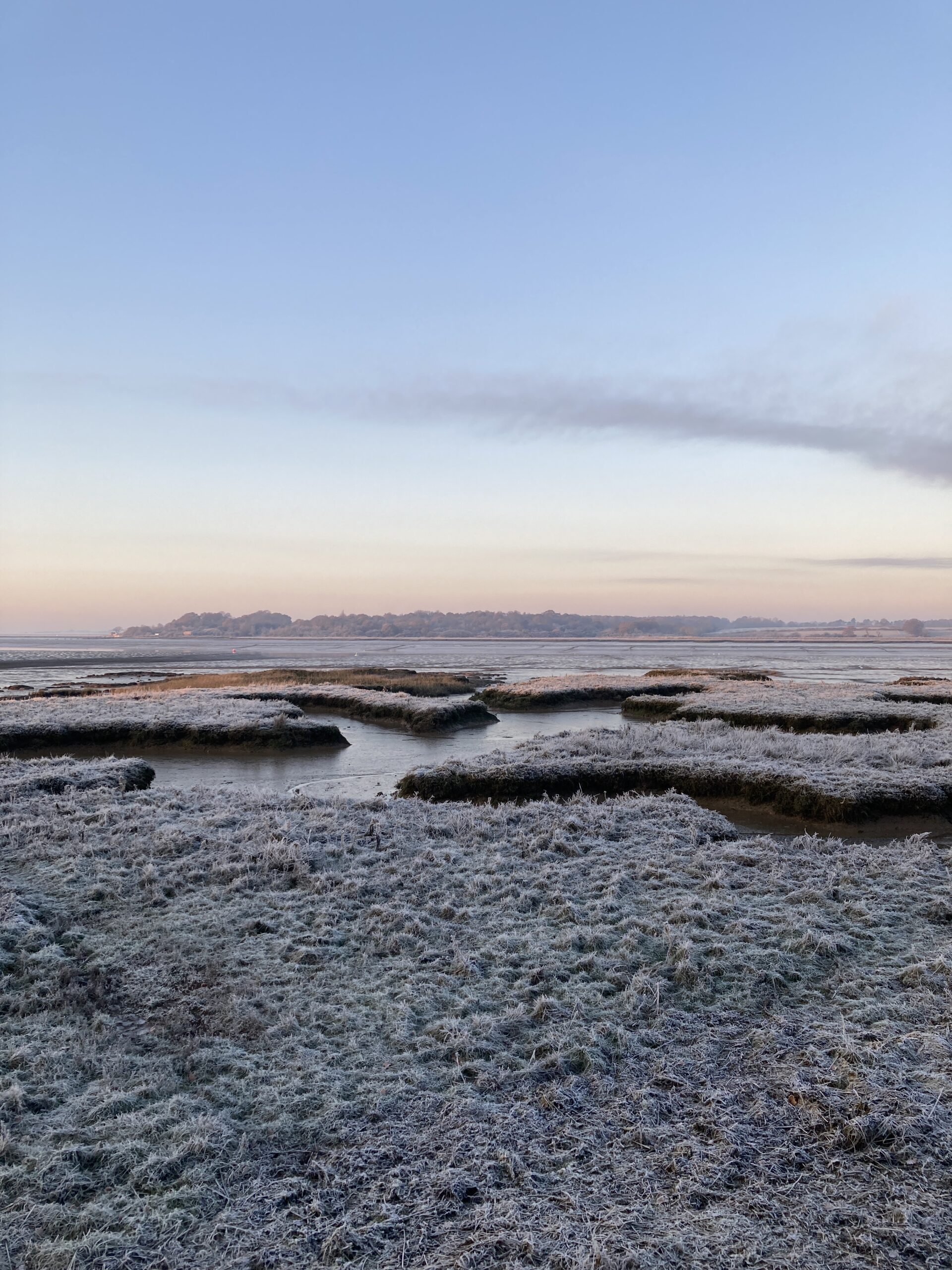 My own pace picked up as I needed some extra circulation. Swing those arms, swing those hips (eh?) – that’s better. I could feel my meat and two veg once again.

My Garmin pinged telling me that I had achieved my daily step goal by 9am. I was WINNING the weekend.

Back in Weird Wiv and I admired some outdoor Christmas decorations. They look kinda cute, I thought. They weren’t decorations, they were overnight icicles 🥶

A 10km walk in total. It’s good to break up the Saturday ParkRun / swimming routine. I should get tattooed more often.

I thawed out listening to Robert Elms and drinking FOUR mugs of tea, He dropped 2,000 Miles. A little early in the season, but a TUNE all the same.

I’m still struck by the power of the performance for the Chrissie Hyde character in the Danny Boyle Lonely Boy series. At a push I’d say it’s the TV highlight of the year for me. I’m including Eastenders in this assessment as well. Gosh.

We had a HARDCORE game of welly wiff waff at lunchtime. The hardcore element was covered with the freeze your bollocks off conditions; winter wiff waff isn’t wiff waff without the wellies.

There was a lone hoopster kid putting up the shots in the nearby basketball court. Respect, Dude.

Never underestimate the local love that folk have for wiff waff. Dog walkers, young families, randoms – they all SMILE when they see you at The Table of Dreams. This goes against my inner nature. I just want to growl back at them. 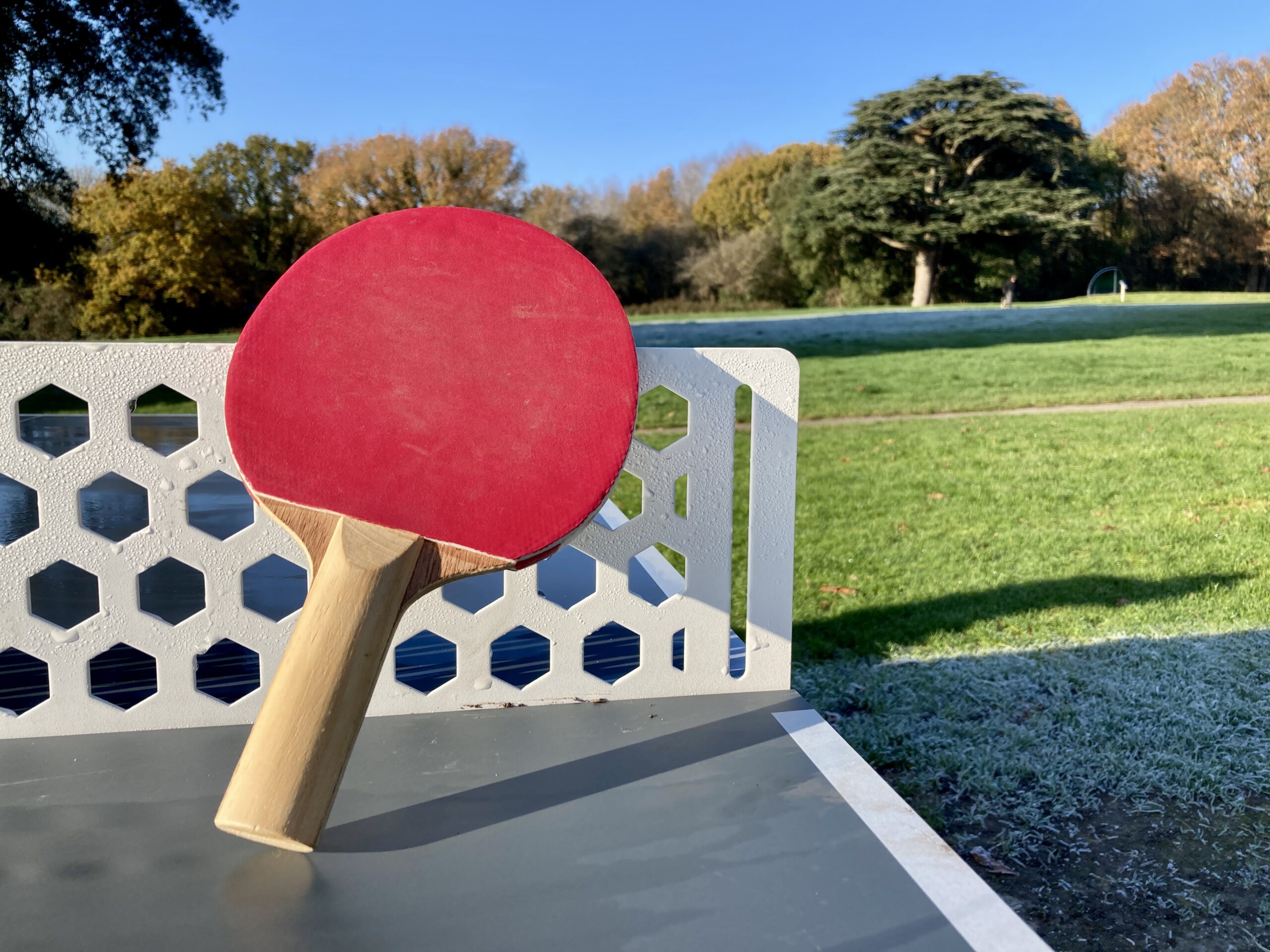 It’s noticeable that A has improved her wiff waff game in recent weeks. She got off to a decent start. She’s found my weak spot on the table. I hesitate to announce where my weak spot is, in case she checks in here and sees what I’m up to. We called it quits at 3-3.

Out went the shout of: To the University! …early afternoon. Essex Rebels had a triple header on home court. Mens Div 3, the Women and then the Mens Div 1 team. BRING IT ON.

We cycled up to the University in bright sunshine. The house that seems to have a flag flying for every occasion didn’t disappoint. There was some double flag action with the cross of St George and, erm, Ipswich Town FC. 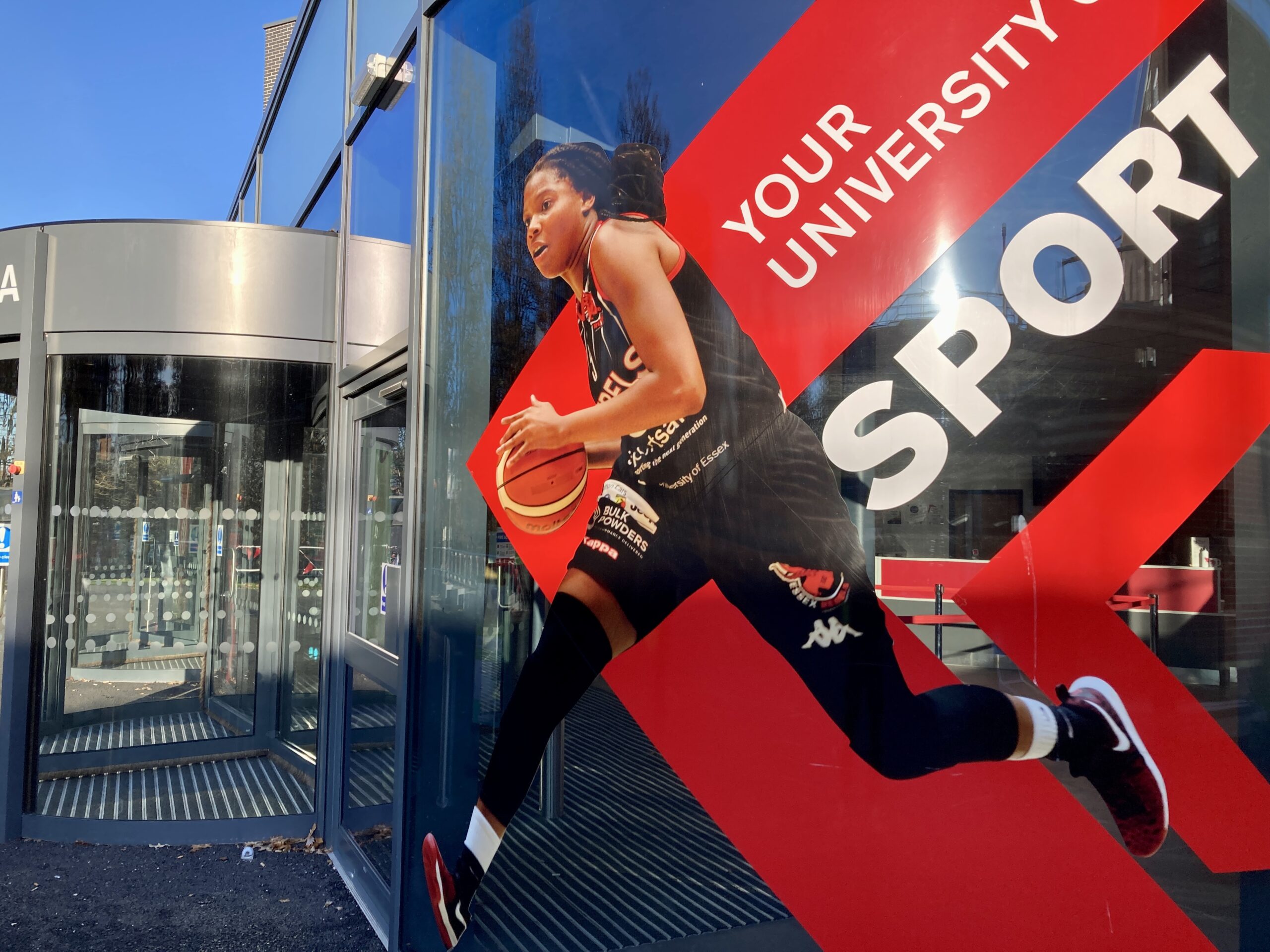 The Sports Arena REEKD of BO. It is a sports arena, after all. There was a little confusion on the big screen. We thought it was the Kiss Cam when Mr DJ beamed our not very enthusiastic faces on the big telly for all to see. We did the deed. It turns out we were only suppose to make a heart sign. Oh well.

The Mens Div 3 were trading points with [GAWD knows who]. It was a competitive game with both sides having a chance right until the final buzzer. Rebels fell short by a single point.

I’ve really bought into the Rebels. You can see that they are trying to grow a club across all levels for both the men and the women. It’s very inclusive, as you would expect from Essex University. It’s also incredibly welcoming. We’ve watched the most live basketball in the past few months than we have compared to any other similar period.

There was a little time to kill before the women tipped off. It coincided with the Morocco Vs Porto game in the World Cup. We sheepishly headed to the SU bar and took up the exact same spot we use occupy some three decades earlier.

It was a very partisan anti-Porto crowd. It was the opposite of back home in Little Portugal. There was a great Moroccan LIMBS scene when the Africans took the lead. 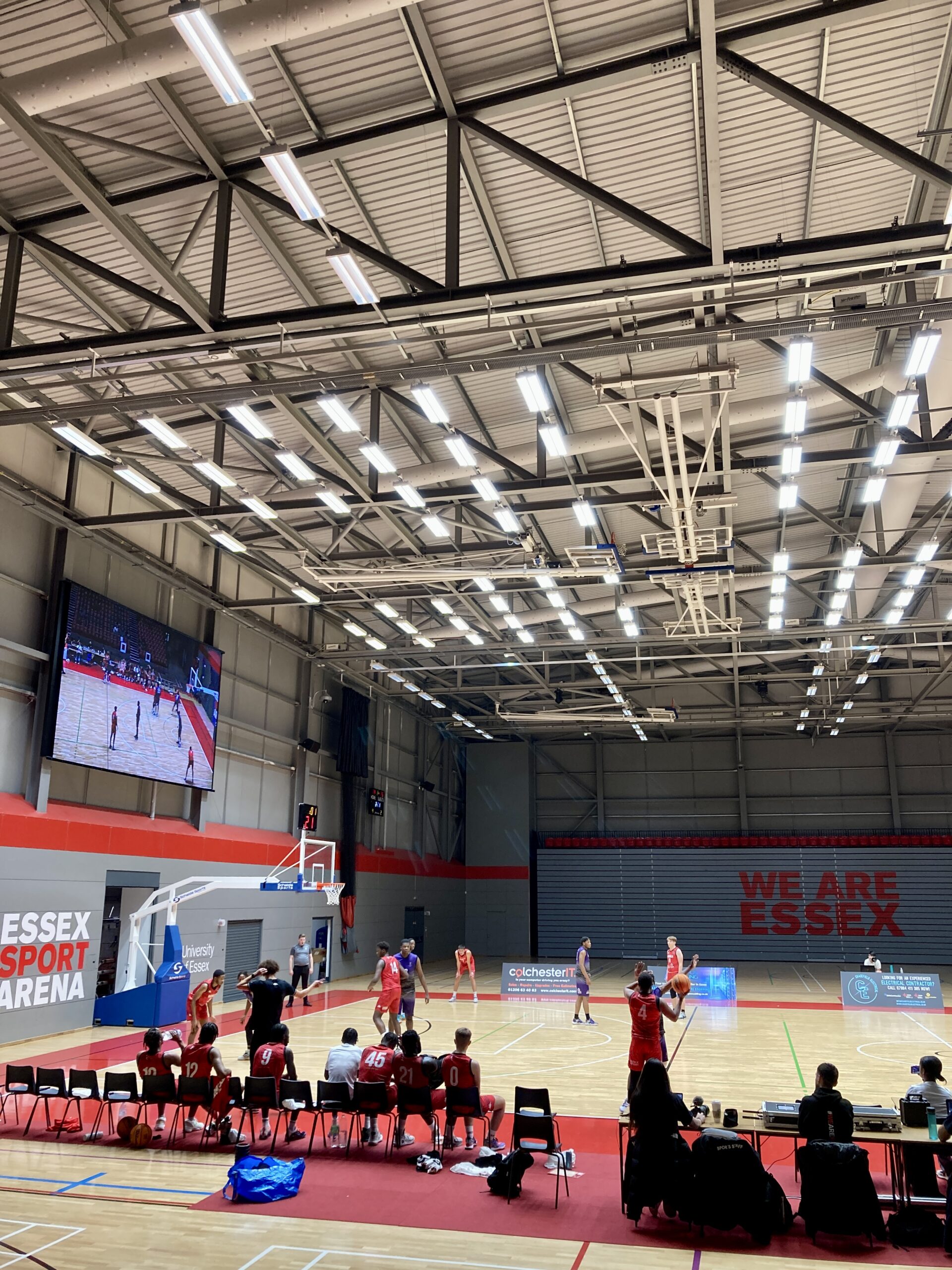 We left at HT and headed back to the basketball. The women struggled for the first three quarters against a very physical Sevenoaks side. They has some absolute BRUISERS on the away bench. At one point Rebels trailed by 20 odd points. They learnt how to play the opposition and ended with a respectable 74-78 defeat.

It was tempting to stay around and watch the Div 1 Men. But football was calling. Yep, Forest away at Olympiacos in the Marinakis Derby. There’s no shame in a 1-0 defeat in a game that is something of a lovely jubbly jolly boy’s outing.

Oh, and then England. Whatever.